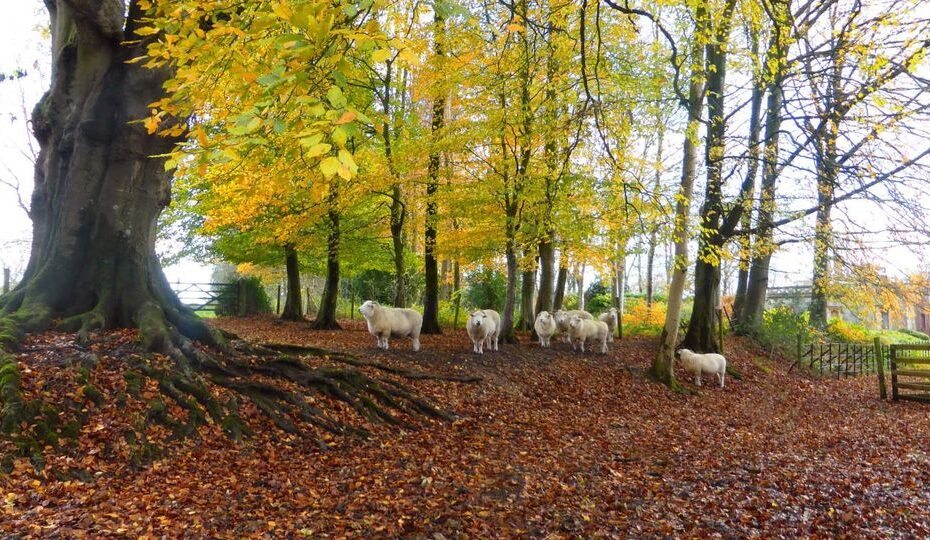 So, my place isn’t in a town or a city, and not on the other side of the world – it’s in a tiny hamlet, hardly on the map. But this is the place I have loved for twenty four years, and forever.

The farmhouse nestles in front of a wood, protected by trees on three sides and sited on a remote country estate on the Somerset/Wiltshire border. I remember every inch of it, from each room of the house, to the fields and hills which lay beyond our tiny windows. From the warmth of the kitchen, my back against the Rayburn, I watched the season’s change.

Overlooked by the site of an ancient hill fort, way up where the ground rises above the farm, the oak tree had been a natural playground for our daughter. The sheep and lambs used its branches as a shade from the sun, and sheltered from storms and snow in its hollowed-out middle.

Although the woods weren’t an original plantation (new beech tree’s had been planted after the Second World War), it always felt as if the landscape had changed little.

Frequent power cuts and winter cold made it easy for me to imagine the history of this place: the people and animals that resided there long ago. The ground floor of the house had once housed cows, and I could picture the people who’d lived upstairs and benefitted from the warm of the beasts as central heating. The back house, that used to be the milking parlour, still smelled of the past –  the brick floor worn to a channel down the middle, where the spilled milk and water of generations had washed the red brick’s to nearly pink – reminding me of the days of labour that had gone on there. Gradually, through the house, I absorbed a strong sense of those who had gone before me. A continuity that felt vital.

My partner’s family had lived and worked this farm since 1947. Even as a naive twenty-one year old, new to the landscape, I soon realised – along with the growing love I felt for the place – that we were living in a house which future inhabitants would probably decide was quirky and outdated. People now prefer central heating, clean lines, a reliable stove, and no lurking ghosts from a former age – but my blacksmith partner and I liked things to be freer. The farm suited our personalities.  Maybe the ancestors welcomed this – they only twice threw a tin off the larder shelf to remind us that we weren’t the first there. But even though it had a history of several hundred years, circa something or other, the farm didn’t feel troubled.

We moved there in 1989, with just a handful of donated furniture. We had a somewhat unreliable Rayburn called Daphne for company, no heating, a small flock of sheep, and hope.

This was the place where we brought home and raised our child. Kittens and lambs arrived – plus two greyhounds that brought joy to our walks. Between them all, they filled our lives to bursting.

Shortly after the foot and mouth outbreak, though, we stopped farming. The decision was already out of our hands. We diversified, started a blacksmith’s forge and clung onto our dreams and tiny farm.  We did all these things. We gained wrinkles, a bit of wisdom, but mainly an overdraft.

Steady and unchanging, our beloved home housed us while we went through twenty-four years’ and three and a half months worth of events – there were celebrations, deaths, births, and  even an entirely new clan of people to get to know, when my birth family made contact with me.

When we got the news that we could no longer secure a permanent lease, the blow was devastating. Reluctantly, we began to search for another forest dwelling.

Although we are now settled again, with two enthusiastic whippets rushing about our heels, our much¬-loved greyhounds are buried in the garden of the old farm, in unmarked graves that we are unable to visit. The girl that played in the hollow tree is grown up and living her own version of a country life, with sheep and forty-three hens.

Although we can never return, my daughter captured the memory of my favourite place in a drawing that sits above the fireplace in our new cottage. The trees show a winter’s day, their branches stark against a colourless sky. I look at the picture and am transported back again. The snow will be here soon.